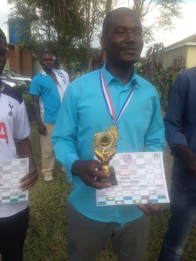 ​Malawi continues to shine as it has yet added on the list a third Master following an astounding performance from Madalitso Thom who in draughts circles is popularly known as Baba. After round 9 Baba amassed......READ MORE 14 points
32 players who qualified from all regions of Malawi including two Masters Moses Winesi and Enock Makoka Banda participated in the championship which took place at Chisale Motel, Nchesi Township in the capital city of Malawi, Lilongwe from 26-29 May 2017. Swiss system with 9 rounds was used by the help of Tournament Manager Progam and the Draughts Variant was Pool Checkers Classic as each player had 25 Minute and 3 sec allotments
Players vehemently competed for the following apart from grand prizes, Trophy and medalsMadalitso Thom Baba despite losing to Enock in round 4 defied odds to finish top and consequently  became Malawi third Master
This Means that Baba has gained the title, qualified for World Draughts Championship, and will access financial Support from the IDF when he will be travelling to Russia to participate in the WDC
The competition was tough as it has seen the former Malawi Champion, Master Enock Makoka Banda finishing position 4 Behind the newly Crowned Master, Master Moses Winesi who finished 2nd  and Zalimba Chingoni who finished 3rd. The former Champion was beaten by Zalimba Chingoni drew against Moses Winesi, John Ngwenya from Mzuzu, Richard Mataka From Mchinji
As Association we are glad at the amazing performance of our players, with such kind of performance we stand better chances to surprise the world again in the coming World Championship
Madalitso has promised draughts enthusiast that he will not let them down, he will make sure Malawi is on Map in as far as draughts sport is concerned
Final results for the whole tournament are as below