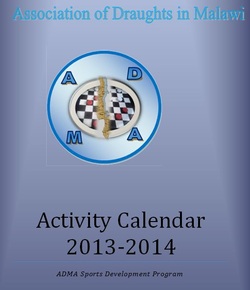 Introduction
This ADMA Activity Calendar booklet has been designed to give an insight of all sports developmental activities that The Association of Draughts in Malawi has planned to carry out during the 2013 – 2014 fiscal year with the support from the Government of Malawi through the Malawi National Council of Sports and also the support from Well Wishers.


Purchase of Draughts Materials For effective draughts sport development in the country it is a prerequisite that ADMA has enough and right materials for use during the game. Basically draughts sport requires three major materials, Board, Pieces and clock. Boards can be made locally and ADMA recommends plastic pieces which can be sourced locally through plastic manufacturing companies. In addition ADMA will require at least three official banners which can easily draw public attention by providing the information about draughts sport development in the country.

Use of Draughts Clock
A draughts clock consists of two adjacent clocks and buttons to stop one clock while starting the other, such that the two component clocks never run simultaneously. Game clocks are used in two-player games where the players move in turn. The purpose is to keep track of the total time each player takes for his or her own moves, and ensure that neither player overly delays the game.As for the clocks ADMA will need to have them as it is an international standard. They will help players to learn time management in competitive local and international tournaments


Schools Program(Draught at Grassroots)
A saying goes, “To learn draughts is simple but to attain mastery level is a lifetime assignment”

Research conducted by ADMA officials has revealed that mastery levels can easily be achieved  if draughts sport is introduced to the young generation(grassroots), For example, in Russia, Ukraine, Trinidad and Tobago Draughts is part of their lessons in primary, and even secondary schools no wonder we have many International Grand Masters from such countries.(http://tt-draughts.com/index.php/development-a-promotion/draughts-on-schools.html )

The international Draughts Federations on its calendar has Youth Championships program and Malawi can only participate in the same if the sport is introduced and tactically taught in schools, hence the need for ADMA to take the sport to grassroots.

The program will target children aged 8 to 15 years. The targeted children are mostly given the fundamental messages that draughts is all about building ones critical thinking and fun.

The program is likely to embrace many primary schools but in this fiscal year ADMA will sample out about 6 primary schools, Chirimba, Mbayani, Ndirande, Namalimwe, Zingwangwa and chilomoni in the southern region. Four primary schools from the central region and three from Northern region will also be considered. ADMA will look into it that relevant skills are imparted in these children with the help of Malawi top players in coordination with sports teachers in these schools.


Seniors Draughts Workshop
ADMA in striving to adhere to the international standard s on the game would wish to be teaching and updating its senior players on what is new in world of draughts. Such workshops would last for a day or two and certificates of attendance and performance would be given to the participants. Depending on funds ADMA may decide to have three workshops in each region or just one at an agreed place.


Draughts in Prisons
ADMA would also wish to introduce the sport into prisons,  this project will also give inmates chance to portray their skills and thereby contributing to the sports development

African Pool Championship  2014
The highly profiled competition is likely to take place in Zambia, as the Zambia Draughts Federation has been offered a chance to host the same and they have since written their Council to endorse it

The challenge cup is likely to attract countries like Malawi, Zimbabwe, Mozambique, South Africa, Uganda, Tanzania and DR Congo and many more.

Details of the tournament will be officially communicated in due course. But the Tournament is likely to place in May or June 2014.